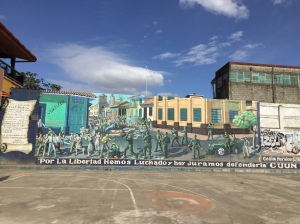 This old hunk of glory was one of my first stops in León, Nicaragua. Getting directions in Nicaragua is basically asking someone for directions and wandering until you’re not lost. Which can be its own kind of fun! This museum is relatively easy to find since it’s in the heart of town. I grew up arguably fluent in Spanish so Nicaragua was definitely an opportunity for me to rehash my speaking abilities. I roamed through this museum with one of the local Spanish speaking guides, he was a former soldier in the war against the Somoza regime. The museum is housed in the building that used to be the Palace of Communications for President Somoza but was taken over by the Sandinistas during the war. Super cool, if I recall there has been limited to no restoration work done to the building in 30 years so it’s a fascinating opportunity to soak up the culture. The museum itself consists of a ton of newspaper clippings, pictures, bits and pieces of weapons, as well as a few murals. Head up to the roof for a gorgeous view of the city. It’s definitely a cool experience and worth the couple bucks

Where am I going next?