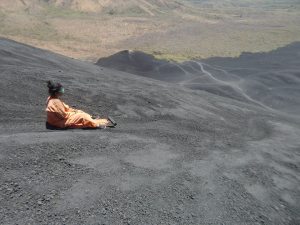 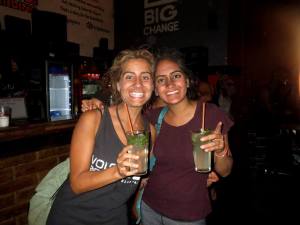 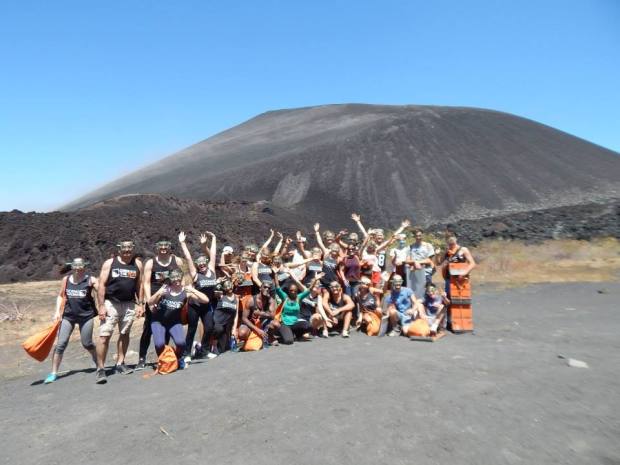 The only activity that I had pre-arranged prior to arriving in Nicaragua was volcano boarding. For better or worse it was an activity I very much wanted to check off my bucket list. It was probably one of the best and most thrilling life experiences that I have ever had. Definitely understand why this activity has ranked at number 2 on CNN’s daredevil bucket list! I went with BigFoot Hostel because it’s where I was staying and they invented it. Cerro Negro is also an active volcano mind you!

Now I wouldn’t necessarily call myself a typical thrill seeker. I’m more like a cautious thrill seeker, basically I’ll do it but I’m definitely not first in line excited to do it. I did a fair bit of blog reading and research pre volcano boarding and got a relatively good idea of what to expect!

The worst part of the entire experience was the wind. We happened to go on a day where the wind was so bad that our guide felt very strongly that the park rangers should not have let us continue. Thankfully no one was injured, we had a couple people who decided they didn’t want to continue mid hike but otherwise we all made it down in one piece! The hike itself isn’t bad in terms of terrain. You’re going up in slow increments and it’s not that strenuous. I went in February and it was a hot day but that was to be expected for traveling in Nicaragua at that time of year! You’re also hiking on volcanic rock which gets hot in the sun.

Again the wind was the absolute worst part. We formed a human chain and at one point an incredibly kind giant Swedish godlike muscular man who was 7 times my size picked me up and carried me up a portion of it because my five foot two, hundred and ten pound self was barely able to stand let alone walk at certain points without blowing away.

But it was 100% worth it. That feeling of making it to the top of that damn volcano after that horrible hike up was one of the best feelings I’ve ever had.

I kept trying to tell myself that I’ve been snowboarding and skiing so it’s kind of like the same experience. To an extent sort of, but snow vs volcanic rocks! My nerves were mainly about this part but it was actually the easiest and best part of the experience. You really can go as slow or as fast as you’d like to based on how you position yourself and maneuver the board. We had people fly down the volcano and others going for a leisurely pace. Totally in your hands…or feet! Basically avoid stopping and going to avoid flying off your board. If you fly off you’re flying into volcanic rocks which can obviously scratch you up!

Your guide takes pictures, so there really isn’t any need to bring your camera or anything. They load you up with a long sleeved one piece suit, gloves, and goggles to protect you from the rocks and dust. Close toed shoes are an absolute must. I wish I would have also brought a bandana or a BUFF. Because of the wind you end up with lots of dust and ash in your lungs. They also give you a water bottle, carry it on your way up the volcano and crush/stash the bottle in the little back pack that the suit came in.

It’s basically like a light wooden rectangular shaped contraption with a rope in the middle that you hold onto to help maneuver the board. You sit on the board (some companies have boards where you stand). Your speed depends on how much you lean forward or lean back. I had zero intention of carrying my own board, I think it was an extra $5 to have one of the locals carry it up. If it’s windy, carrying that board yourself is going to make your life that much more difficult. Support the local economy!

Was it worth it?

Hell yeah it was one of the funnest experiences I’ve ever had. Scary at some points but totally worth it! I’d do it again in a heart beat. The view of Nicaragua and the surrounding volcanoes from the top was phenomenal.

Where am I going next?